Growing up, I remember when scooters first hit the scene. They were all the rave at school and skateboarders would get annoyed with kids flooding the skatepark with their new, fancy scooters. I always wanted one and think your kids do too. That’s why we wroth this article about the 5 Best Electric Scooters for Young Kids.

The first and only scooter that I ever had, was a blue and silver one. My sister bought herself a green one and we would race each other down the street. This was, of course, before electric scooters were produced — we still had to propel ourselves using one leg.

Although there are still kids cruising and bruising on these manual scooters, the creation of motorized ones sure adds more fun to it.

I don’t know what it is about a motorized machine with wheels that makes it more fun. Perhaps it’s because you know you don’t need to tire yourself out physically by pushing yourself to get from one point to another. Or maybe it’s because you can go faster than normal.

Despite that, electric scooters (especially those made for kids) come with a built-in speed limit. So parents, the world-over don’t need to stress about their child hitting insane speeds on their scooters and causing harm to themselves, should they fall. 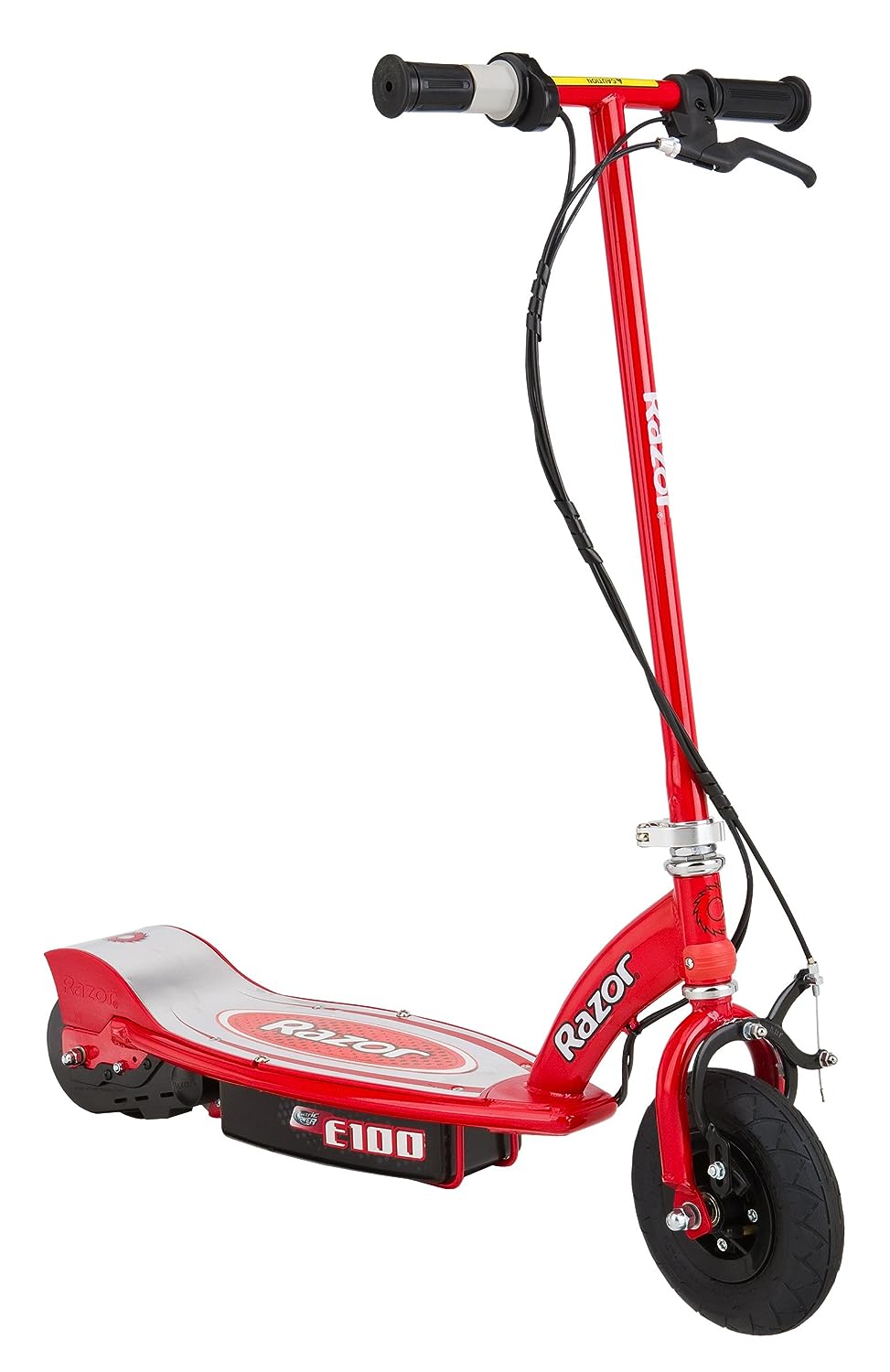 The quality of Razor scooters is by far one of the best available on the market. This E100 model has a cool design and is well-built. Its sturdy frame will ensure that kids have a safe and fun time while riding this scooter.

Despite being an entry-level scooter, the E100 promises a great deal of fun. A feature that makes this model stand out from the rest, is that the motor won’t engage until the scooter is traveling three miles per hour.

This is a clever feature to have. It avoids the possibility of the scooter being “whiskey throttled” and hurting your child or someone else. It’s also beneficial for kids who are new to riding scooters, as this feature will help them to get the hang of riding it.

But once you get past that initial “jumpstart,” this scooter is capable of hitting a top speed of 10 miles per hour. Although it’s not that fast, it still provides children with the fun of riding a motorized scooter.

The deck of the E100 is large enough for any child to have more than enough of a foothold to ensure that they have all the balance and confidence in the world. The handlebar carries both the throttle and brake control. This scooter makes use of the classic twist-grip throttle and utilizes a single-speed gear mechanic. The brakes on the handlebar control the front brakes.

The front tire is a large pneumatic tire that is designed to handle and absorb the small bumps and bops that a child would typically take their scooter on. The motor is chain-driven and really quiet — after all, it is electric. This motor is also powerful enough to comfortably move someone with a bodyweight of 120 pounds.

Two rechargeable 12-volt batteries are the powerhouse behind this fun machine. When fully charged, they provide a ride-time of up to 40 minutes. However, the batteries need to be charged for more than 12 hours before its first use. 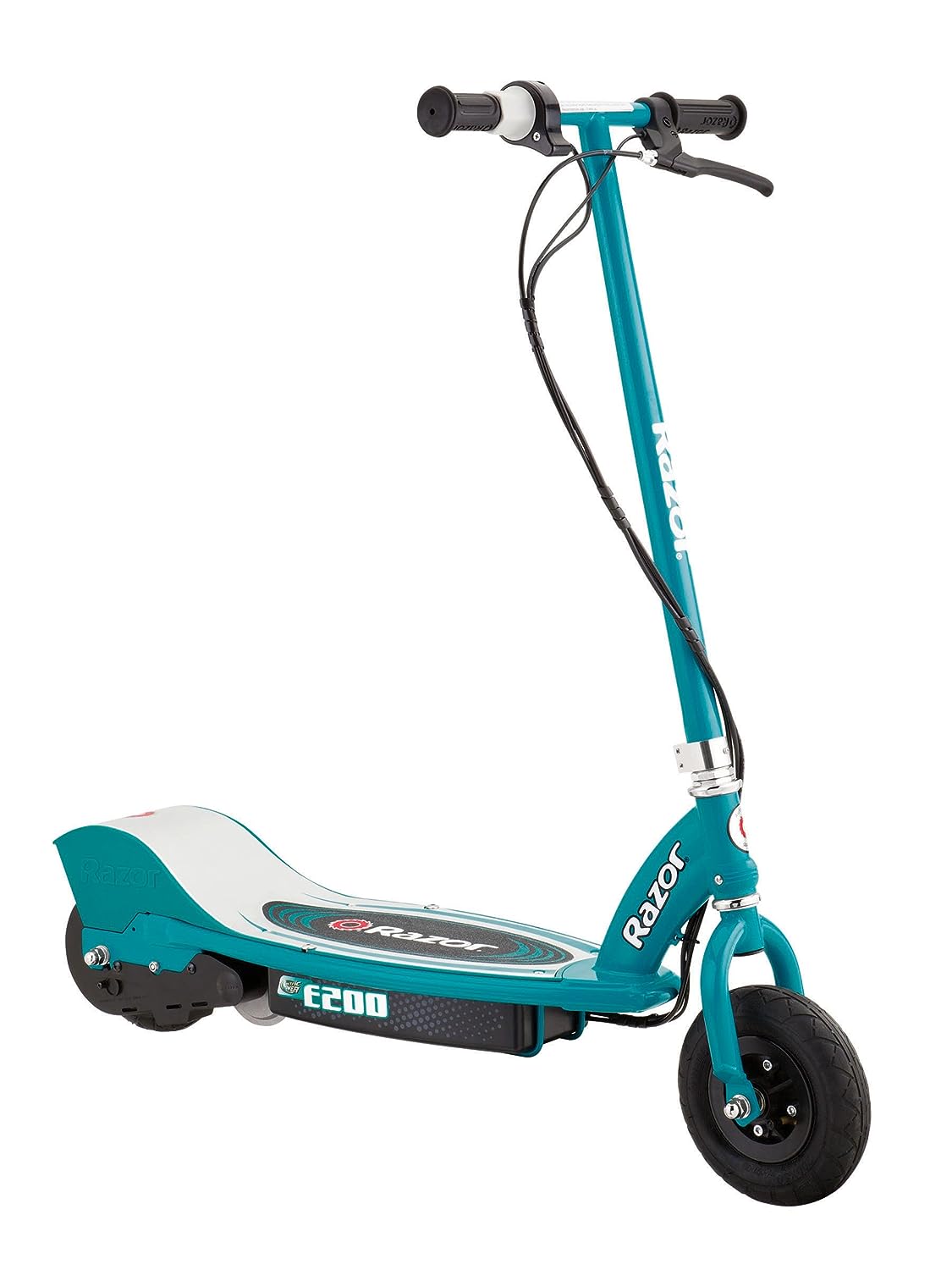 Next up is the “older brother” of the Razor E100. Introducing the Razor E200, this fella’s got a little more kick than the aforementioned scooter.

Made with the more experienced scooter rider in mind. And when I say “more experienced”, I really mean “older.” In other words, if your kid is closer to 10 than they are to 5 years of age, then the E200 is more suited for them. It’s not uncommon for a kid to go from the E100 to the E200.

Think of it as your kid going from beginner to intermediate.

In its most basic elements, this model is similar to the previous one; a large deck, steel construction, dual 12-volt batteries, and about 40 minutes of continuous use.

However, what makes this one different is the fact that it has pneumatic tires at the front and rear. This enables your child to cruise over more terrain. The top speed on the E200 is two miles faster than the E100, totalling at 12 miles per hour (which still is a safe speed).

The brakes on this model are also operated by hand but are rear brakes instead of front brakes. Its design and power allow it to carry kids that weigh up to 154 pounds. Also, this model doesn’t require the “kickstart” that the E100 does.

The recommended age for this scooter is 13 and up. However, this seems a little too high and is probably done for legal reasons. We found this scooter to be quite suitable for kids between the ages of 8-10 — or seven if your child is adventurous. 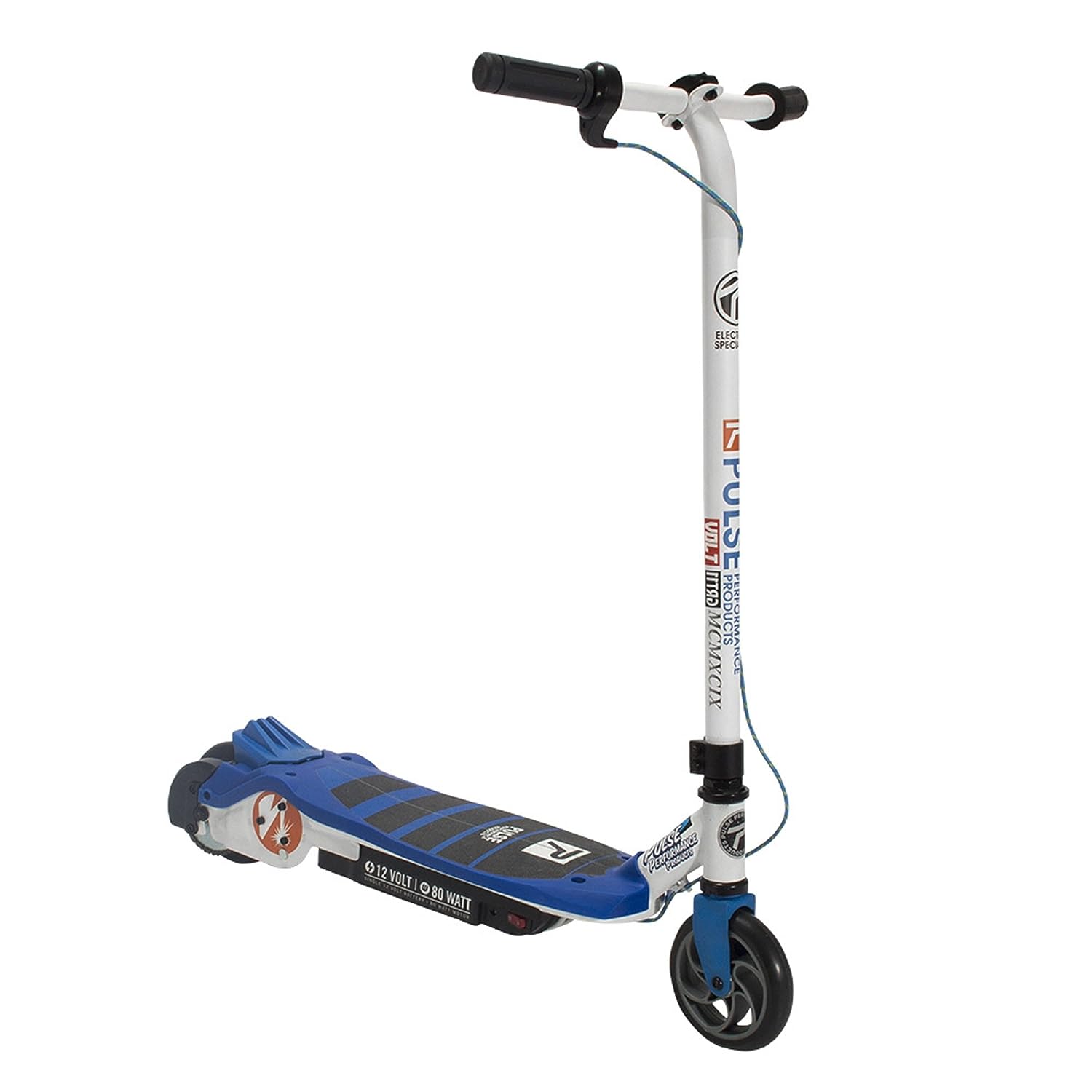 Here’s something that’s slightly easier on the wallet. Although it might not be a Razor scooter, it still does well to keep your kids entertained and busy.

The GRT-11 might be less expensive, but it’s still capable of dealing with the “roughness” of a child.

The GRT-11 is powered by a single 12-volt battery and clocks the speedometer at 8 miles per hour, making it slower than both of the above Razor models. Due to its tame speed, this scooter is a more suitable choice for younger riders.

The drivetrain makes use of a chain-drive system to propel the scooter. The deck is large enough to cover both feet of any child and the steel-constructed frame adds to its durability.

On the downside, this scooter has two polyurethane wheels as opposed to pneumatic tires. This makes for an uncomfortable ride when riding outdoors. So, for the best riding experience, this scooter should only be ridden on smooth surfaces.

The brake is a foot-operated brake which is located at the back of the scooter and it operates a rear brake only. The throttle is located on the handlebar but is controlled by the use of your thumb. 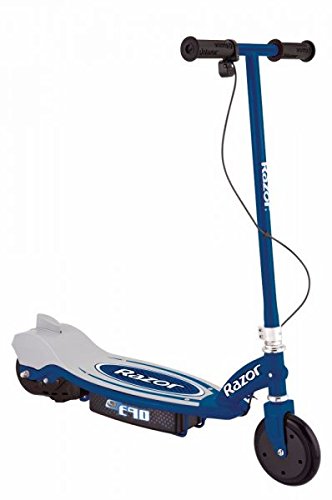 Okay, this is the last Razor scooter on this list — promise! This here is the E90. If you’re any good at reading patterns, you’ll probably come to the conclusion that the E90 is likely the lesser of the E-models we’ve listed so far.

This one only comes with one 12-volt battery as opposed to having two. Making it a little less powerful than its bigger siblings. With less power, this scooter is easier to master for younger kids and is a great option as a first motorized scooter for your young one!

Like the other two Razors, this one is also well-constructed. And if you’re paying attention to the pictures of the scooters, you’ll notice some slight changes. The E90 doesn’t have pneumatic tires, instead, it has urethane wheels. Secondly, you’ll notice the absence of a hand-operated brake lever. The brakes are located at the back of the E90, just like the GRT-11.

The throttle is replaced with a push button instead of the traditional twist-grip. This could be quite helpful for young kids to learn. Similar to the E100, this model also utilizes a kickstart method before the motor engages and has a top speed of 9 miles per hour. 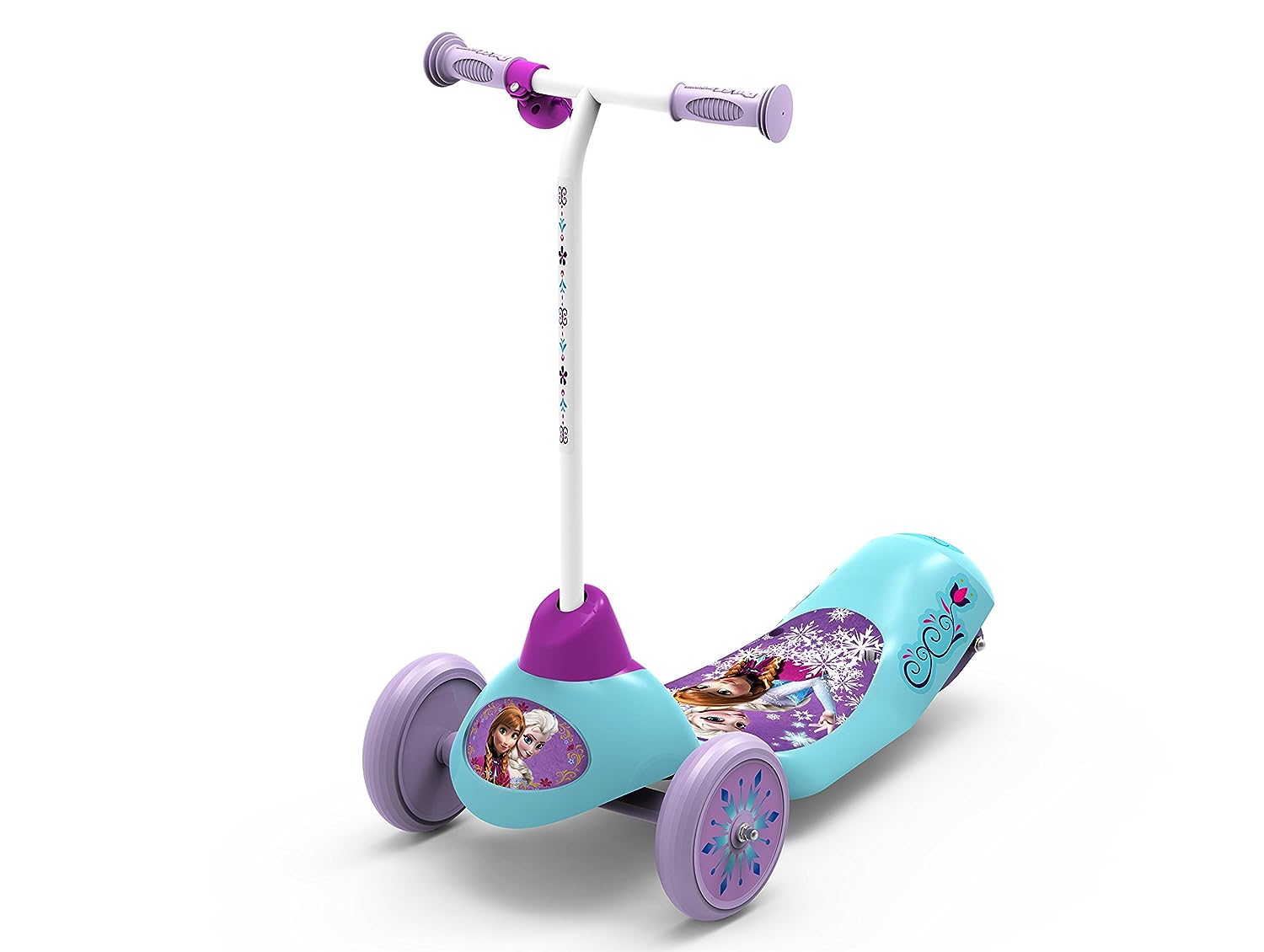 Of course, we had to include an option for all the little Frozen fans out there! Not only is this scooter ideal for Frozen fans, it’s super easy and safe to ride, too.

This scooter has two wheels in the front and one in the back. And to make things even more stable, they’ve designed it with a low center of gravity. The motor that powers this scooter is a low-torque motor with a speed limit set to 1.75 miles per hour. All this will ensure that your child doesn’t fall over on their scooter when turning.

The deck of this scooter is especially large and is a non-slip deck. The accelerator is a push-button and there are no brakes on this model. Who needs brakes when you’re cruising at a walking pace? Besides, this scooter will basically come to a standstill when the accelerator is released.

You may also want to read:

Top Trampolines for Toddlers and Kids

The 8 Best Walkie Talkies For Kids (And Adults!)